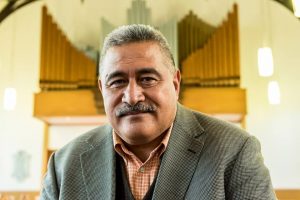 “The Presbyterian Church of Aotearoa New Zealand has elected the Rev Taimoanaifakaofo (Fakaofo) Kaio as its future leader.

He will take up the role of Moderator from 3 October 2018 at the Presbyterian Church’s General Assembly to be held at St Andrew’s College in Christchurch.

The Presbyterian Church elects a new person as its leader every two years, and the Church has called on Fakaofo to take up the role from 2018 to 2020.

Fakaofo is honoured and humbled to have been elected to lead the Church.

Fakaofo says the Church like NZ society is increasingly multicultural and cross-cultural and that ministry must reach out and form the kinds of one-on-one relationships that respond to different but similar deep life experiences.

He says the Church is about relationship – forming them and nurturing them. “It is the place where we can share our similarities; we have all faced need and strife. Church is where we can make connections and support one another in our faith journey, make life a little less hard for each other. I believe our Church to be full of people with a giving pastoral heart to help.”

Fakaofo says his background is in ministering to a congregation. “The entire diverse Presbyterian Church will soon be my congregation and I am ready to respond to what they ask of me.”

Fakaofo’s Samoan parents were missionaries with the London Missionary Society in Tokelau. He is named after the Tokelau island of Fakaofo where he was born. Tokelauan is the first of his five languages. He attended school in Auckland and later moved to Wellington where he was an elder and lay preacher at Porirua Pacific Islanders Church of Christ The King.

Fakaofo studied for ministry at the Knox Theological College from 1992. After completing his training in 1994, he ministered at St Margaret, Belmont, North Shore until 2005. He then ministered at Onehunga Cooperating Parish where he still serves today.

He has served the wider Presbyterian Church as its representative at many ecumenical assemblies and consultations held in the Pacific, Africa, Europe and the Caribbean.

In his youth Fakaofo was a keen sportsman and played Wellington Rugby League premier grade for 12 years.

Fakaofo is married to Ruth and they have two adult daughters, two adult sons and one grandson.”

Every Easter an Auckland church feeds the multitude with loaves and fishes – à la Jesus – at a massive feast held on an indoor basketball court.

Men of Onehunga’s Co-operative Parish head out fishing at dawn on Saturday, while the women folk bake bread in their home kitchens.

Then on the eve of Easter Sunday more than 100 parishioners flock in floral finery – for this is a mainly Pacific Islander congregation – to share the simple two-food meal and each others’ company.

“Getting all these Cook Islanders, Samoans, Niueans, Tongans working together is at the heart of the event,” said Reverend Fakaofo Kaio, initiator of the church’s “ministry of fishing”.  Read more