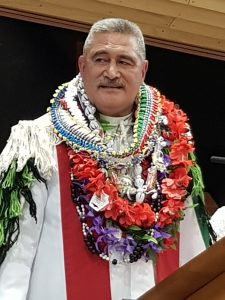 Rev Kaio was born in the Tokelau Islands to LMS missionary parents. He is married to Ruth Risati and has four children. Initially educated in Auckland, he is a graduate of Knox Theological College and Otago University.

Previous work experience has included ten years at Ford Motors, including four years as production foreman, then four years employed in the Prison Service of the Justice Department. He then spent ten years as Minister of Belmont Presbyterian Church (North Shore) prior to his appointment to the Onehunga Co-operating Parish in 2005.

He has a desire for “a loving and caring multi-cultural, multi-denominational church which is Christ-centred, Bible-based and community-oriented.” He believes in strong and compassionate leadership, encouraging all to high standards in Christian morals and values. 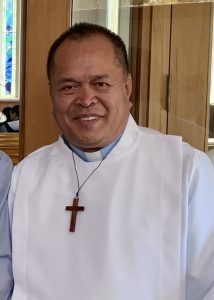 Reverend Kaurasi Lagi was born on the beautiful island of Rotuma, one of the many islands in the Fiji group. His father was a Methodist Minister and the family was posted to several churches throughout Fiji. From a very young age Kaurasi became actively involved with the Sunday School, Youth, Mens’ Fellowship and Choir groups in Fiji, continuing with these activities in the Auckland Fijian Tabacakacaka Methodist Church in New Zealand when he migrated here in the 1980’s. He worked for the Auckland Area Health Board over 31 years.

Kaurasi is married to Ruby and they have 3 children: Kafoa, Sulu and Manase.

He believes in proclaiming the Good News of love, peace, happiness, joy and the Kingdom come, which is in Jesus Christ of Nazareth.

Murray was born in Dunedin, then lived and went to school in Whangarei. After farming for two years, he then went to the Congregational Theological College and Auckland University, and later studied at Trinity Theological School, Singapore.

He is married to Kathleen Taylor and has three grown-up children and three grandchildren. Parishes he has served in have been Karori, Napier, Tokoroa, Mangere, Belmont, Manurewa, Onehunga and Papakura. Murray retired in 2001 after 40 years in Ministry but continues to serve the church in preaching in various parishes and as a part-time Hospital Chaplain.

He believes we must always strive to make the gospel relevant and enjoys reading theology, belongs to the University of the Third Age and tries to keep fit by walking, swimming and going to the gym. Murray and Kath also love to see their grandchildren. 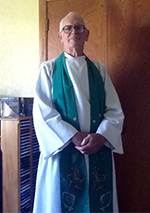 Peter was born in Taumarunui but his family were forced by the Depression to leave farming and move to Morrinsville where Peter received his schooling. He studied at Auckland University and Knox College in Dunedin, graduating in 1961 and serving as Assistant Minister at Cambridge for three years.

Peter was Minister there for 26 years, while Barbara taught first at Onehunga and then at Penrose High School. A close partnership had existed for many years between the churches of Onehunga and Peter was one of the team who planned the Co-operating Parish, which was formed in 1996. Peter and Barbara retired in 2001 and Peter served as part-time Minister in St Heliers, Otahuhu and Blockhouse Bay before coming ‘home’ to Onehunga in 2013. He is delighted to be part of the special family that is the Onehunga Co-operating Parish, and looks forward to sharing in the Church`s work in the community.